6e of September, the Create momentum for the deployment of CCS in the CEE region conference took place in Brussels, organized by Bellona Europa as part of the ongoing CCS4CEE project. The event brought together CCS stakeholders from Central and Eastern Europe (CEE), including representatives from industry, national governments, civil society and academia, as well as EU institutions.

Although several topics were covered during the event, a recurring theme throughout each session was the need for multiple modalities of CO transport.2 to storage. And rightly so; as pointed out by Bellona Europa and CATF’s ongoing #TenTTuesday campaign, the CEE region (perhaps even more so than its Western counterpart) will need to rely on road, rail as well as transport by ship and barge to stimulate market development and enable CCS to play its necessary role in the decarbonization efforts of the region.

The reason why multiple transport modalities are particularly relevant in the Central and Eastern European region is that several Central and Eastern European countries are landlocked. They will therefore have to export their CO2 to neighboring countries for permanent offshore storage. As discussed at the event, getting support for onshore underground storage can be difficult. In addition, the emissions clusters are, in some cases, low density, with smaller volumes of CO2 transport to storage – not enough to justify infrastructure such as pipelines from the transmitters themselves. Currently, while the construction of cross-border CO2 pipeline infrastructure is not on the political agenda of governments in many central and eastern European countries, many emitters are turning to ships, railroads, barges and trucks to transport their CO2 emissions to permanent storage.

As noted by Dr Marko Maver, representative of the Ministry of Environment and Spatial Planning of Slovenia, the impetus is building in Central and Eastern Europe at an unprecedented rate with more potential than ever to launch several CCS projects, first and foremost in Poland and Bulgaria, to create CCS hubs as well as to explore viable CO2 storage possibilities in the area.

However, as MEP Cristian Busoi, Chairman of the European Parliament’s ITRE Committee, pointed out, “we have to be very precise in giving right funding opportunities for CCS and CCUS projects and the role of the CO2 Transport infrastructure”. For several methods of transporting CO2 To be considered as an option, it is crucial to obtain recognition and support mechanisms at European level (as well as at national level).

The recently revised EU ETS directive, proposed by the European Commission, will recognize several methods of transporting CO2 once adopted by the co-legislators. This is a step in the right direction, but for the use of multiple transport modalities to be achieved at the necessary scale and achieve widespread deployment of CCS, positive market recognition and signals are needed. to allow first-comers. Frontrunners tend to be exposed to more risk when considering less commonly used technologies as part of their decarbonization strategies. If uncertainties persist around the role of multiple modes of transport in the development of a European CO2 transport to the storage network, early entrants seeking to decarbonize could face significant delays due to perceived risks that could be relatively easily mitigated. Industries should also be able to tap into financial support to carry out such infrastructure development projects over the next few years. Such financial support will also help to further reduce financial risks for first movers looking to capture emissions and transport them to storage.

The European Union currently faces an opportunity to reduce the perceived risks associated with the multiple transport modalities of CO2 storage for the first arrivals. Multimodal CO allocation2 transport-to-storage projects The status of PCI (Project of Common Interest) under the TEN-T regulation would send a strong signal to emitters considering deploying CCS as part of their decarbonisation strategies. In particular, this would be important for emitters with smaller volumes of CO2 to be transported to storage, which cannot justify investments in fixed CO2 transportation infrastructure, such as pipelines, alone. Several industrial players could tap into new funding streams mainly from the Connecting Europe Facility under the TEN-T Regulation and accelerate the development of CO2 transport infrastructure (and, by extension, the deployment of CCS). It would also allow different transportation solutions to be developed based on what is most suitable for individual plants, based on the geographic specificities of the regions where each industrial facility is located. In the long term, this would lead to larger volumes of CO captured2 in the region, allowing commonly constructed CO2 infrastructure, such as pipelines, and help put its importance on the agenda of national governments.

The case of Slovenia, presented at the conference, is a good example. As pointed out by Dr. Marko Maver, representative of the Slovenian government, CO2 storage is not permitted within the country’s borders, which means that any CO captured2 must be transported to neighboring countries for storage. What Slovenia would therefore need from the European Commission, he continued, is toadvance financing and encourage the development of multiple transport infrastructures and multimodal transport infrastructures. So ships, trucks, rails and so on. I think this is what will drive CCS not only in Slovenia but also in neighboring countries”.

Salonit Anhovo, the Slovenian cement manufacturer[1]for example, would require rail transport support for CO2 – because the cement plant is ideally located near existing rail infrastructure. According to a CO2 transport feasibility study conducted by Deloitte for Salonit Anhovo, in the absence not only of CO2 the pipeline infrastructure itself, but general discussions at government level regarding the possibility of constructing such pipelines, alternative methods of transportation should be considered. Rails and ships were cited as some of the most realistic alternatives in the case of the Slovenian cement plant to reach the closest potential CO2 storage sites in Italy or Croatia (as indicated below). 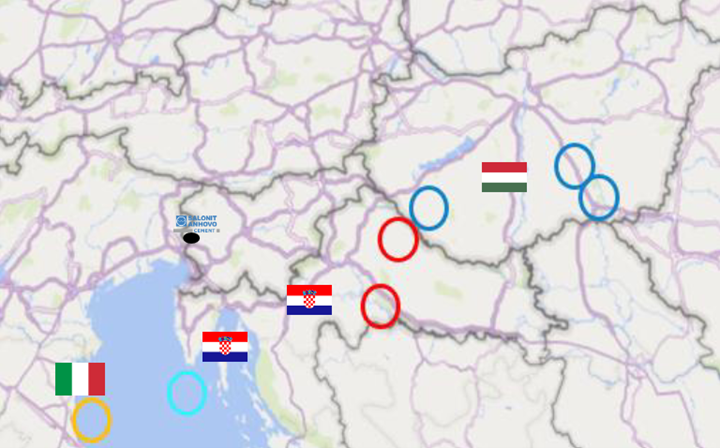 Tomaz Vuk, chairman of the board of Salonit Anhovo, responsible for the cement plant’s decarbonization process, also mentioned that early adopters could gain economic benefit by getting a head start in decarbonizing their production processes. This, in turn, can make decarbonization attractive and accelerate the green transition of the hardest-to-scale industries. For this to happen, however, EU support and recognition of all modes of transporting CO2 storage is imperative.

The Slovenian example, however, is not unique, as one of the CCS4CEE project experts, Kamil Laskowski, pointed out. Polish CCS stakeholders, Laskowski added, often mention that while legislation at EU level tends to give preference to CO2 transport by pipelines, future pilot and demonstration projects would instead rely on “conventional” modes of transport, such as road, barge or rail.

Maciej Malicki of Air Liquide Poland explained that the company is considering using railways to transport CO2 as part of their Poland-EU CCS Interconnector project, citing the low density of transmitter groups currently involved in the project as the reason. In later stages of the project, they plan to rely on CO yet to be built2 pipeline infrastructure. However, delaying deployment of CCS until these pipelines are built risks setting back the widespread application of the technology in the region by years.

In the case of landlocked countries, in particular, the feasibility of cross-border transport to offshore storage in other countries is essential, as obtaining public support for onshore CO2 storage can be quite difficult – noted Chris Bolesta, CO2 responsible for DG ENER’s capture, use and storage policy. In the absence of CO2 pipeline infrastructure, supporting multiple transport modalities is key to kick-starting the deployment of CCS in many landlocked countries in Central and Eastern Europe.

The EU should ensure that the revision of the TEN-T Regulation does not miss this excellent opportunity to ensure recognition of multiple modes of transport such as ship, rail, barge and truck by bringing CO2 to storage. Send a positive market signal and encourage industrial decarbonisation across Europe, especially in regions where such arrangements will be essential to kick-start market development. This is what Bellona Europa and the CATF are currently working on as part of our #TenTTuesday campaign.

[1] Read Bellona Europa’s interview with the Chairman of the Board of Salonit Anhovo here: Rail and Ship Transport of CO2 to Storage: Key to Enable Slovenian Industrial Decarbonisation at Salonit Anhavo Cement Plant – Bellona.org

ESG integration best practice Real estate investors have a long history of responsible investing largely due to the relative homogeneity of the underlying assets – buildings. Unlike more diversified asset classes, real estate has benefited from the development of sustainability certifications and comparable data sets. For example, BREEAM, one of the largest providers of green […]

Los Angeles, April 12, 2022 (GLOBE NEWSWIRE) — Balance7 CEO Dr. Nooristani Announces New Blog Post: Kidney Stones and How to Avoid Them Kidney stones will wake you up with very severe back (flank) pain that will often radiate to the abdomen and especially to the groin, testicles and lips. It is often sharp and […]

The COP26 is experiencing its first major oscillation. This may seem like a slightly odd assessment for a summit that has seen its first president sacked and replaced unceremoniously, been subject to a pandemic-induced postponement, faced calls for a second postponement and experienced funding disputes with the Scottish government, strong criticism from developing countries of […]